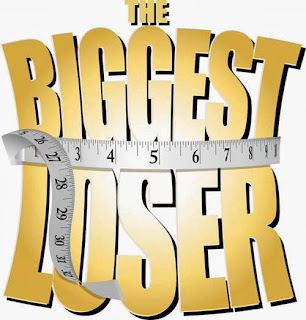 So I sent out a mass message to a bunch of my local people the other day - a bit of a look to the future, if you will.

I wanted to see who might be interested in joining a Biggest Loser type challenge, starting in January. I wasn't expecting much of a response but I was pleasantly surprised to find that 9 of those people jumped at the chance, and 2 of us have roped in our husbands as well.

We'll each chip in $5 and then take a picture of the number on the scale. At the end of March, whoever has lost the biggest percentage of weight will win the money in the pot.


It's really a win win for all of us. We all get to get healthier and lose some weight, and one of us gets to win some money. Motivation, and winning! WOO!

I'm really looking forward to this challenge because it is where my natural competitiveness (which seems to have developed in my adult years) will come into play and will do far more than any self motivation (which I seem to lack BIG TIME) has done for me lately. Hopefully we can keep doing this throughout the year and it will do us all the world of good. 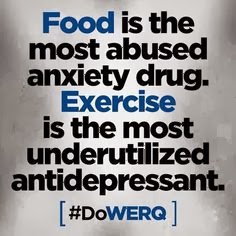 I found this picture on Pinterest and thought it was great. For me, food has always been there to fill a hole. Happy, sad, angry, lonely, frustrated, and bored - food is always there for me. From what I gather, it is that way for a lot of people.

Years ago, I got into the habit of munching on things in the evening while watching TV. Boredom food. Restlessness food? Anyway, it's a habit I still battle.

What are some of the habits that you find hard to break?

The other reason that this picture jumped out at me is because of the exercise part. For YEARS, my mother has been telling me that aside from fitness and health, exercise can be good for my mood. And for years, I have brushed her off because hey, who really wants to admit their mother is right about something?!

But she IS right. A simple walk, or a run (if you're that way inclined - I am not), can do wonders for your mood and lift your spirits.

So.....challenge time. I want each and every one of you to go out and DO something this week. At least 4 days of the week. I will, too! It doesn't have to be something new, just DO it! And work on breaking some of those habits. 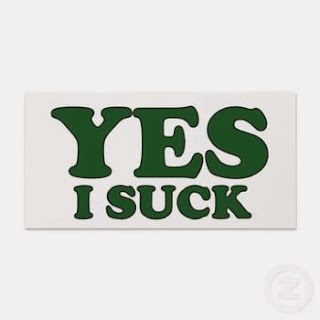 Yeah. 11 months ago I posted saying I was back. I was back, and excited, and motivated, and ....stuff. And then, I vanished.

Probably not. I wouldn't blame you if you were one of those people sitting there thinking, "Ah! The Oreos won again".

For the record, they didn't. The Pepsi Max, energy drinks, and chips won. They ganged up on me, pinned me to the couch, and proceeded to jump down my throat. Over and over and over again.

See, I thought I had my head sorted out. I thought that I had conquered all the shit that had built up in there and had mastered some semblance of control over my life. It was July 2012 when I landed in hospital with a nasty infection in my leg (otherwise known as Cellulitis) (otherwise known as OMG KILL ME NOW THIS F***ING HURTS!!). After being released, I had to take it easy. And it was then that my motivation started to slip.

If I had to sit around and do nothing, dammit! I was gonna make it worth my while. It was delicious. But it UNdid all that work I had put in before. All that weight that I lost, all that health I gained, undone.

Fast forward to May and we got a call asking if we'd take in a wee foster child. Of course we will! I don't have ANY good reason to say no, let's do it! He was with us for a month. He was a challenge but he was sweet. Unfortunately, he was like yet another full time job and my health started to suffer. Toward the end of May, I lost the plot. Literally. Sobbing like a fool on my bed as my poor husband looked on in confusion, wondering what he could do to help.

In the end, the boy went elsewhere, I stepped down from a couple of volunteering gigs, and tried to put myself back together. And anything I couldn't reassemble? Well, there's food to cure the guilt from that, right?

So here we are, just a few weeks out from Christmas 2013 and I'm still heavy, still unfit, still unhealthy, and still miserable with myself. I'm not a good role model for my children. But I want to change all that. I want to get back on that track that I was on before. So I will. With your help, and help from some local friends.

Just tonight, when my brain was doing the whole "haha! sleep is for the weak!" act, I sent out a message to some local people asking if they'd join me in a 3 month, Biggest Loser Challenge. Let's see what happens.


How are all of you? Are you still trucking along, getting healthy? What tips do you have for someone like me that is just trying to get back on track?
You got the skinny from Unknown 5 comments:

The Return of Jabba the Hut

Ok. I know that's not me over there and I know I'm not quite at Jabba the Hut size and I know that Jack doesn't say he's back. But it was either a creepy picture of him or one of Arnie. I don't like Arnie.

Anyway, I'm back. I need to be back. It is imperative that I return to this, my most comfortable of spaces so that I may be publicly flogged for my transgressions in order for my life path to return to where it should be.

Or some such crap anyway. I really have a hard time coming up with words to describe why I need to return to this space. All I know is that is important in this moment.

A year ago I left this blog. I needed to dedicate the time to my family. I've done that. A year is enough. I'm bored.

Not really. I'm just at the point where I have a little bit more work/life balance. I'm only working ONE job instead of 3. That one job takes up only 16 hours a week instead of 50. And although I am now studying as well, I do find I have more of a handle on what my priorities are.

This means that not only can I incorporate blogging back into my life, I can also actually enjoy it again. I hope.

So, I'll have more of an update on WHY it is so important for me to be back here....but that will have to wait until later in the week. Right now I have to go and study.

I hope that some of you are still around. And if you're not? Well, I'll never know anyway.
You got the skinny from Unknown 25 comments: