** If you haven't entered to win the beautiful Le Creuset, go HERE and leave your comment **

*****
I didn't weigh in this week. Or rather, I didn't weigh in at Weight Watchers. I had taken the kids to Nelson (about an hour and a half away) for the day and by the time we got back, I was just...DONE. So I weighed myself here at home instead. My home scale is 400 grams lighter than the ones at WW and the little, angry lady that lives in my scale said I weighed 136.6. Which means that I would have been 137 kgs on the WW ones, which means I stayed the same. I'll take that.
*****

I was at a client's house the other night and we were talking about weight. I told her that at my heaviest, I had been 168 kgs (370 lbs). The look on her face was priceless. You could tell that she couldn't decide what to say or do. In the end, after she had finished buggin' out, she went with "How could you WALK?!" My simple answer was that I didn't. I waddled. And now I can run, because now I am down 21.6 kgs and I have energy.

I took her copies of my progress pics and got to see the whole buggin' out routine all over again. I love the reactions I get from people when they find out that I used to be MUCH bigger than I am now.
*****

I took these pictures earlier this week. The kids are on school holidays and rather than stay in the house with them, we decided to go exploring. So, we went in search of Monkey Bay. And we found it. All we had to do was walk up these stairs: 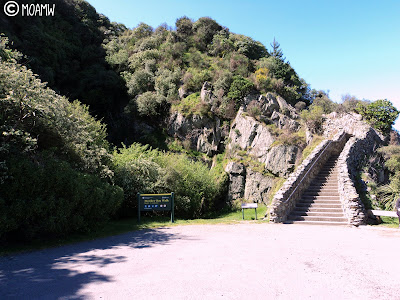 And then down this wee track for about 5 minutes: 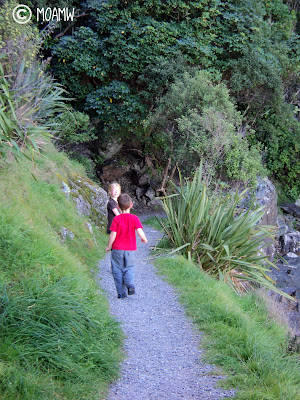 To get to this beautiful little cove: 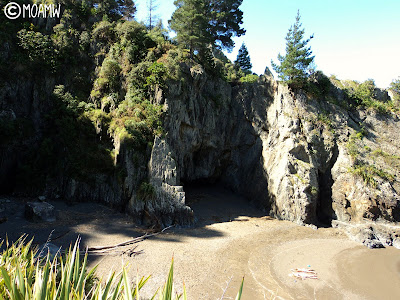 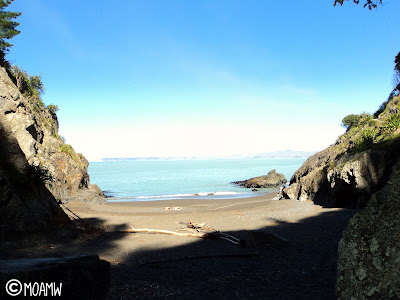 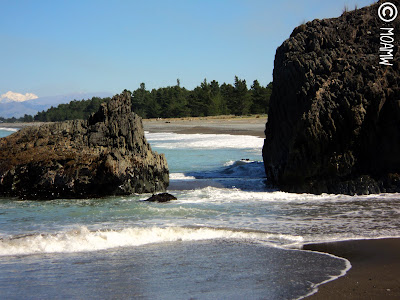 The walk was short, but invigorating. The views were amazing: 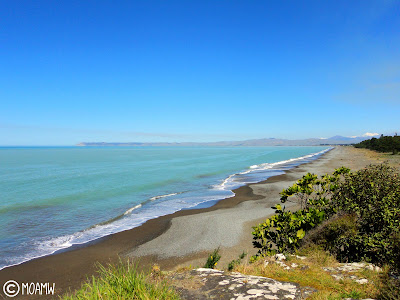 And of course it provides a perfect backdrop for a self portrait: 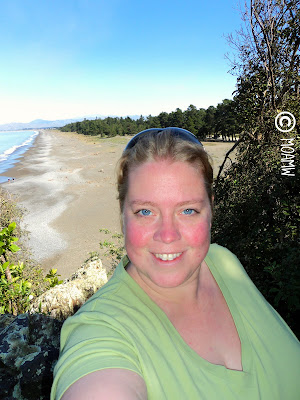 What does this have to do with health? Well, I noticed I've lost more fat off my face...and I look happier. Happy = Healthy = Happy.
*****

My whole eating according to my hunger signals is going fairly well. I've done much better with not snacking, I'm drinking more water, and I find I don't go to the pantry as often. I hope it continues to be this good.
*****

I've noticed a few people around the blogging world struggling lately. Either with exercise, food, portion control or all of the above, it seems to be getting people down. I'm not sure if it's the time of the year or if people really are getting discouraged. I'd like to share this video with you in the hopes that it will inspire you just a little bit:


That's all for today folks! Come back again soon!
You got the skinny from Maggie 9 comments:

Blenders. Slow cookers. Utensils. Food Processors. Dutch Ovens. Saucepans.
What do all of those things have in common?
1) They're all things that you can use to make delicious, HEALTHY meals to help with your weightloss.

2) They're all sold by CSNStores.com
I have run a couple of giveaways over on my other blog, courtesy of CSN, and they were well received. So, when I was approached to do one here, I jumped at it. I would have loved to have done a review of one of their products but, alas, I live in the wrong part of the world. So all of you lovelies out there get to benefit instead!

I know how important healthy eating is as a part of our journeys and to be able to eat the right things, you need to have the right tools. One of MY favourite things to make is casseroles. They're quick, easy, delicious and many of them only require one dish. So when I was looking through the CSN site to see what I could offer up to you, I decided I was going to go with something I've given away before...... 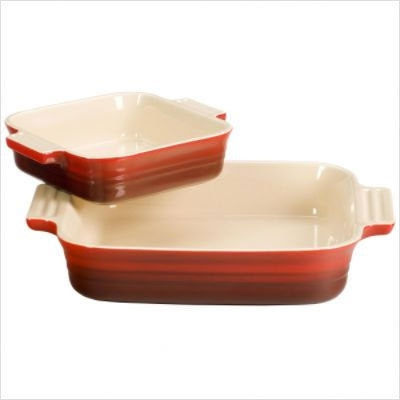 These beauties come in Cherry Red, Caribbean Blue and Kiwi Green. There's a 9" baking dish and a 5" one with it. They're beautiful and wonderful and I think everyone should have a set.

So how can you win these?

Just leave a comment on this post. You can comment ONCE a day until the end of the giveaway. At the end, I will draw using the Random Number Generator.

Competition is open to all US and Canadian residents. Please make sure you have a valid email address. If I can't get hold of you, I'll give it away to someone else. Giveaway closes Friday 1st October, 2010.

Oh...and I fully expect a yummy recipe from whoever wins!
You got the skinny from Maggie 28 comments:

Well, I've made a discovery! I mentioned in my last post that I had the stomach flu. As a result of that stomach flu, I didn't eat for a few days...and was losing weight. Then I started to feel better and began to eat a little bit. Turns out that after not eating for a while, when you start again, your body starts holding onto it all. I know that probably doesn't come as a shock to most of you but I was a little more surprised than I perhaps should have been.

Where I had been expecting a loss of more than 1 kilo (2.2 lbs), I actually had a loss of 700 grams (1.54 lbs). Nothing to scoff at, for sure, but certainly less than I was expecting. I'll take it though. I feel like I may have actually broken the plateau that I had for June, July and August.

I've really, majorly, kicked my ass into gear. I needed to. I had to break the plateau, I needed to see those numbers going down again and MOST importantly, I have a wedding to go to in April. Not only do I have to be AT the wedding, but I have to be IN it. I'm the Maid of Honour. So we'll see how much I can lose between now and the end of April so I can look half decent in my dress.

I'm trying something new. A friend that I met at WW mentioned it last week and I thought I'd give it a go. It's another one of those things that most of you will probably read and say "well DUH" but for some reason it never really connected in my head til last week.

I'm following my hunger signals instead of the clock. Instead of having breakfast at 8am, a snack at 10am, lunch at noon, a snack at 3pm and dinner at 6pm...followed by boredom eating in the evening.....I am eating when I am actually hungry. Sure, I have my breakfast at 8am like normal but instead of eating because the clock says I should, I wait until I'm actually hungry. Or that's the idea. Today was the first day and it went really well. Tonight I felt hungry but it turned out I was just thirsty. One nice big bottle of water later, and I felt much better.

We'll see how it goes for the next few days.


Make sure you come back on Monday....I'll have a giveaway starting courtesy of CSN Stores!
You got the skinny from Maggie 5 comments:

Wow, I really suck at this

*sigh* Another 3 weeks of nothing from me. I'm really bad at this.

I don't even have a cool excuse!

This month has been interesting. After my last post, I went to my next meeting and managed a loss of 1.1 kgs (2.42 lbs) which was nice, albeit unexpected. Then last week I went and managed a gain of 500 grams (1.1 lbs) which sucked, but was totally expected because I did nothing all week and barely tracked.

What amused me was that the week I had my nice loss, I had spent the weekend in Wellington. I went over to see a roller derby bout. I stayed in a hotel, on my own. I had room service of lasagna, burgers, chips and wedges...on my own. I had a beer at the bout, with my new friend Maz. I thought for sure that I would gain weight. Turns out, that all the walking I did that weekend, did me some good. Wellington is a very hilly city.

The next couple of weeks will be interesting. I've been quite ill for the last few days with the stomach flu so I've not had much of anything to eat and according to my home scales, I'm down a fair amount. Silver lining and all that jazz. The problem is that I know that it could just as easily come back on for next week once I start eating again.

We'll see how it goes.

So how are all of you going?
You got the skinny from Maggie 2 comments:

Absence makes the heart grow something

Hello peoples! I realise that I have been gone for nigh on a month now and I'm sure you've all missed me terribly. The thing is, I hadn't actually intended to disappear. One day turned into two, which turned into a week, which turned into a month. It was like the universe jumped into my life and said "Hey! You need a break from ...well... everything." and then put me on a blog hiatus. My other blog was noticeably vacant as well.

But I'm back. Because I think a month is long enough to disappear for and because, quite frankly, I missed you. I'm just happy that I left you with the fantastical wordage of Christine from Phoenix Revolution. She's a smart lady, that one. I really should take her advice more often.

So what's been happening in my little corner of the world? Not a whole damn lot, I have to say. I'm actually a little ashamed to say it. I spent August adjusting my weight. In the wrong direction. I gained 2.6 kgs (5.72 lbs) over three weeks. I'd love to reel off a whole bunch of excuses for my poor results but the plain and simple truth is that when *I* was sick with the flu, I was eating anything I wanted. Because I was sick. It made sense in my mind. Then, when my daughter was VERY ill with what the doctor said was Swine Flu, I ate anything I wanted. Because I was stressed about her. Totally made sense, again, in my mind. Add to that, that I wasn't exercising and what do you get? Oh yeah...weight gain.

Well. It's September now. And I'm back on track. I weighed in on Wednesday evening which was September 1st and I was down a whole 100 grams (0.22 lbs). Ooooohhh Aaaahhh. I know. Remarkable really. I've been tracking religiously and writing down everything. I had my month of blahs and binging and now it's time to put some serious work into this again.

It's ok. I'll be considerably lighter by Christmas.

I'm sorry I haven't been around to say hello to any of you. Blame the Universe. It made me. I'll be around to visit soon!
You got the skinny from Maggie 4 comments: